The UNESCO Chair in Intercultural and Interreligious Dialogue for South-East Europe was established at the University of Graz in 2007 and is the oldest of its kind in Austria.

It was initially held by Professor Bert Groen. After successful evaluation, the Chair was renewed by UNESCO for the period 2020-2024. The UNESCO Chair is located at the Institute for Ecumenical Theology, Eastern Orthodoxy and Patrology (Catholic Theological Faculty) at the University of Graz The Chair supports UNESCO’s objective to contribute to peace and security in the world by promoting collaboration among nations through education, science, culture and communication in order to further universal respect for justice, for the rule of law and for the human rights and fundamental freedoms which are affirmed for the peoples of the world, without distinction of race, sex, language or religion.

The Chair also contributes to the existing focus on South East Europe in the theological faculty and the university as a whole which considers itself a historic hub for cooperation with this region as well as the geographical setting in Graz, a UNESCO heritage city with a strong legacy in terms of interreligious dialogue and peace. 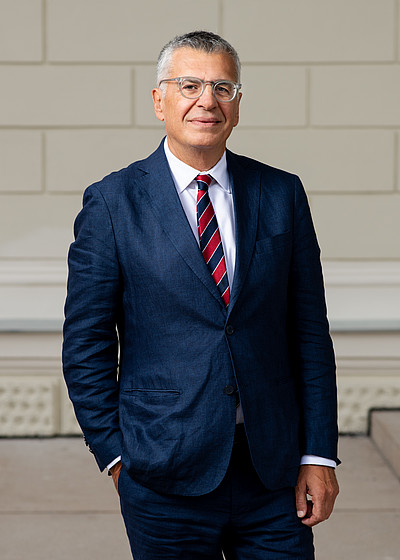 Pablo Argárate is an Argentian-born scholar who was educated in Argentina and Germany and worked in Canada for some years before joining the Theological Faculty in Graz; he possesses a high degree of intercultural expertise. He has already built an extensive international network collaborating with scholars around the globe, coming from different churches religious traditions. His keen interest in Orthodox Theology has led him to focus on South East Europe for some years now, and in recent years his work has also resulted in inter-religious activities in the Middle East. He speaks a number of modern languages, teaching and publishing among others in Romanian and Greek, which provides him with close access to regional cultures and people. He is intensely involved in the activities of Pro Oriente, a foundation initiated by Cardinal Franz König in Vienna in 1964 to overcome the schism between the Roman Catholic Church and the Orthodox and Oriental Orthodox. Since October 2021 he is also the Dean of the Catholic Theological Faculty.

Link to his personal homepage

The University Twinning and Networking (UNITWIN)/UNESCO Chairs Programme is a network of 800 higher education institutions in 116 countries. It promotes international inter-university cooperation and networking to enhance institutional capacities through knowledge sharing and collaborative work. Through the programme, higher education and research institutions worldwide pool their resources to address pressing challenges and contribute to the development of their societies. The network represents the combined power of brilliant minds from around the world to create sustainable solutions for today’s challenges and to think ahead of the future. The programme plays a key role by offering ideas, innovation, knowledge, information and support for achieving all of the Sustainable Development Goals which are at the heart of the 2030 Agenda for Sustainable Development.